In most business, when a company receives payment for a sold product, that payment can be considered an income. But to an insurance company, only the part of the premium that has been earned (Earned Premium) can be considered as income. The rest is the unearned premium, or the premium reserve. How the premium is earned vary between insurance products and industries. Here I’ll show a couple of methods and how they are calculated in SQL Server.

The simplest calculation of earned premium is the pro rata, or accounting method. We simply calculate a premium per day, and then multiply this with the number of days passed since the policy start date:

Let’s do this calculation in T-SQL. First we need a sample table with some policies. Run the following to create a new database with a table containing policies:

That gives us the following policies:

Let’s say we want to calculate the earned premium at 2015-06-30. With regard to this date, we have the following policy periods:

The first values we need to calculate concerns the number of days: Total Days, No Days Earned and No Days Unearned. Those values are calculated using an ;WITH statement that is a so called common table expression, or CTE. By using a CTE, I’m able to re-use the calculation of the number of days simply by referencing them by name, rather than doing the same calculation several times:

The results from the T-SQL should look like this:

The first 5 columns are the same as in the dbo.Policies table. The rest of the columns are:

TotalDays – This is the total number of days the policy is effective. Note that the DATEDIFF function returns the number of datepart boundaries crossed between the specified startdate and enddate. Therefore I add 1 to all DATEDIFF calculations to get 365 days for a year. Note that we cant’t add one day to both earned and unearned premium, since then we would have one day too many. (Thanks to Joe for commenting on this) In the code above, one day is added to the earned premium only. But be sure to investigate how policy periods should be handled in your own data.

EarnedDays – Returns the number of earned days. This calculation handles three different cases. Policies not yet in effect, Policies completed, and Current Policies.

UnearnedDays – Returns the number of unearned days. The calculation handles the same three cases as EarnedDays.

The rest of the columns are calculated outside of the CTE, in the end of the statement:

DayPremium – The calculation for the daily premium is: Premium / TotalDays.

In the calculation above, we distributed the premium proportionally (pro rata) along the number of days the policy is in effect. But some insurance products are earned in a more uneven way. Take for instance the seasonal risk variation in boat policies that carries a greater risk during the summer season than during the winter. Or a traditional warranty, that can carry a greater risk the longer the policy is in effect.

Let’s complicate the example above by assuming that the policies cover boats. After studying the distribution of claim cost, we realize that risk is distributed seasonally along months in the following way:

Remember I’m from Sweden, we have short summer seasons 🙂

Now we want to earn the premiums in a way corresponding to the risk exposure above. First, let’s create a table with the risk months:

What we want to do now is to modify the original T-SQL statement so that the seasonal variation comes into play. In order to do this we must first split each policy into as many rows as there are months in the policy. For each of those months, we want to return the weight (RiskPercentage) from above. To simplify things, we will consider the premium to be totally earned after 12 months. Therefore, the premium for month 13 and onward is 0. Further, if the coverage period is shorter than 12 months, we simply divide the premium into equally large parts. The sum of earned and unearned premium must always be 100% of the total premium. That’s why we need to create a function that handles all possible lengths of the policies.

Also note that the calculation is done per month now, not by day. Of course, a risk per day could also be used. But beware of “data explosion”, that is, huge amounts of data since each policy is multiplied with the number of days it covers.

To encapsulate the distribution over month calculation, I created a T-SQL function. This way the code becomes less complex, and a function is easier to maintain. It is also easier to create and test many different premium calculations.

But first we need a Numbers function, just to return a row for each month. The function simply accepts an integer and returns that many rows.

The function to calculate risk for each month is created with this T-SQL: 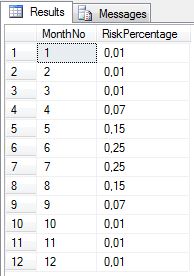 If we call the function with less than one year, we get:

The value 0,1428571428571 comes from the calculation 1 / 7, since we wanted to distribute the premium proportionally if the insurance period was less than 12 months.

If the period is more than 12 months, month 13 and above gets 0 percent of the premium:

The final statement to calculate earned and unearned premiums is similar to the pro rata method, but is calculated with a risk factor per month instead of a day premium:

Since we calculate the premiums unequally per month, we must use one row for each month the policy is in effect. Let’s walk through each policy.

Policy1 ends in the middle of the summer so the earned and unearned premiums are split by half:

Policy2 ends in July and does not cover a whole year so the premiums are distributed equally along the months. Since the granularity is a month, July gets as large a premium as the other months even if it only covers half of July:

Policy5 covers 19 months. But only the first 12 carry risk, so premiums are 0 from month 13 and later: 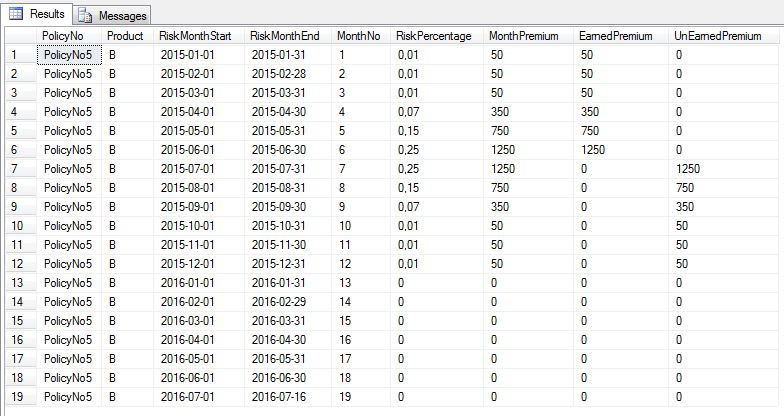