The default setting in SQL Server 2005 and later is to keep a trace running all the time that captures basic information about the instance. This is called the Default Trace. The created trace files can be viewed in Performance Monitor or by using T-SQL and they can be very useful in some troubleshooting scenarios.

SQL Server keeps the trace history in five log files. Each log file can be up to 20 Mb. So there is no way of knowing how long each trace event will stay in the log files before deletion. It depends of how many events the instance is generating.

To check if the default trace is enabled, use:

To enable or disable the default trace, use:

The trace is light weight, so I recommend keeping it running unless you suspect you’d get some performance benefits from disabling it.

To see where SQL Server keeps the trace files, use:

That statement will show the current trace file that SQL Server is logging to.

The trace files can be opened and viewed like any other trace file with SQL Server Profiler. Profiler can also be used to see the events that are collected. Select File -> Properties and the Events Selection tab: 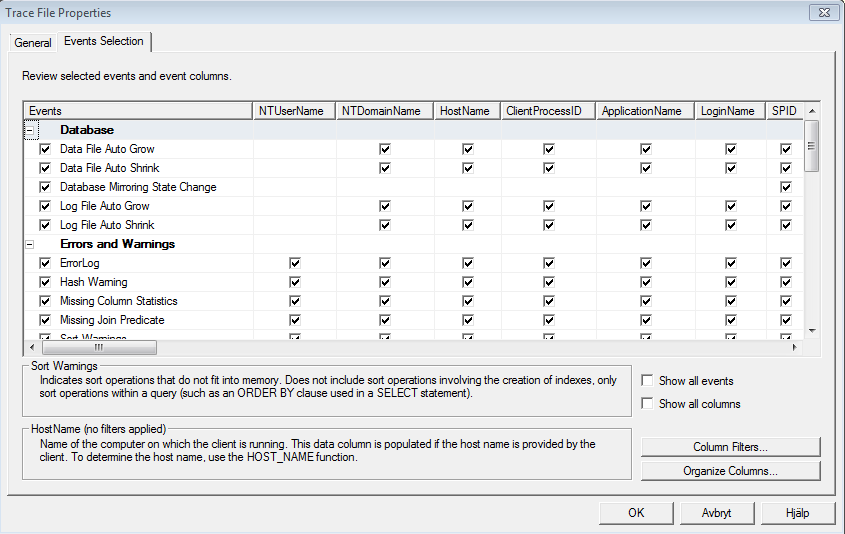 The following list shows the events that are captured by the default trace. The descriptions are from MSDN. There are traces in the following categories: Database, Errors and Warnings, Objects, Performance, Security Audit, Server and Full text. The list is based on a SQL Server 2014 instance:

Indicates that a data file was extended automatically by the server.

Indicates that a log file was extended automatically by the server.

Indicates that a data file was shrunk automatically by the server.

Indicates that a log file was shrunk automatically by the server.

Occurs when the state of a mirrored database changes.

Indicates that a hashing operation (for example, hash join, hash aggregate, hash union, and hash distinct) that is not processing on a buffer partition has reverted to an alternate plan. This can occur because of recursion depth, data skew, trace flags, or bit counting.

Column statistics that could have been useful for the optimizer are not available.

Query that has no join predicate is being executed. This could result in a long-running query.

Indicates that an object has been created, such as for CREATE INDEX, CREATE TABLE, and CREATE DATABASE statements.

Indicates that an object has been deleted, such as in DROP INDEX and DROP TABLE statements.

Occurs when a database object is altered.

Occurs when the SQL Server service state is modified.

Indicates that a login attempt to SQL Server from a client failed.

Occurs every time a GRANT, DENY, REVOKE for a statement permission is issued by any user in SQL Server for database-only actions such as granting permissions on a database.

Occurs every time a GRANT, DENY, REVOKE for an object permission is issued by any user in SQL Server.

Occurs when a SQL Server login is added or removed; for sp_addlogin and sp_droplogin.

Occurs when a Windows login right is added or removed; for sp_grantlogin, sp_revokelogin, and sp_denylogin.

Occurs when a property of a login, except passwords, is modified; for sp_defaultdb and sp_defaultlanguage.

Occurs when a login is added or removed from a fixed server role; for sp_addsrvrolemember, and sp_dropsrvrolemember.

Occurs when a login is added or removed as a database user (Windows or SQL Server) to a database; for sp_grantdbaccess, sp_revokedbaccess, sp_adduser, and sp_dropuser.

Occurs when a login is added or removed as a database user (fixed or user-defined) to a database; for sp_addrolemember, sp_droprolemember, and sp_changegroup.

Occurs when a login is added or removed as a database user to a database; for sp_addrole and sp_droprole.

Occurs when a BACKUP or RESTORE command is issued.

Occurs when DBCC commands are issued.

Occurs when audit trace modifications are made.

Occurs when ALTER AUTHORIZATION is used to change the owner of a database and permissions are checked to do that.

Occurs when ALTER AUTHORIZATION is used to assign an owner to an object and permissions are checked to do that.

Occurs when a statement checks for the ALTER TRACE permission.

SQL Server memory usage has increased or decreased by either 1 megabyte (MB) or 5 percent of the maximum server memory, whichever is greater.

Occurs when a full-text crawl (population) starts. Use to check if a crawl request is picked up by worker tasks.

Occurs when a full-text crawl (population) stops. Stops occur when a crawl completes successfully or when a fatal error occurs.

View the default trace with T-SQL

The trace files can also be queried with T-SQL, using the system table sys.fn_trace_gettable. This detailed blog post shows how to query all the log trace files at once.

The content varies depending on the type of event, but some general columns are:

This is the event identifier, as in the list above. For instance, 69 for a sort warning. The complete list of events can be found in the system table sys.trace_events.

Events can be further grouped into trace categories that can be found in sys.trace_categories. This is the same as the headers in the list above. For instance, a 69 – Sort Warning belongs to the category Errors and Warnings.

Events can be further divided into sub classes (for instance drop or create) that can be found in the system table sys.trace_subclass_values.

The column ObjectType refers to a list of object types. They are not available in SQL Server (that I know of), but the list can be found at MSDN.